How to Get Rid of Stubborn Sink Smells 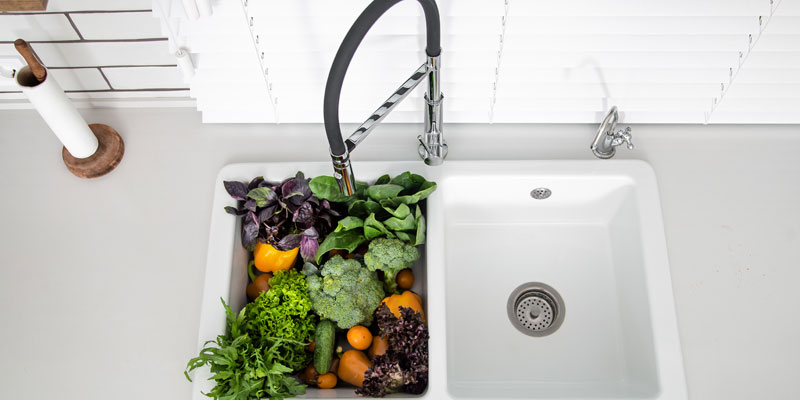 A kitchen may appear immaculately clean and yet bear a rising tide of odor from an apparently gleaming source: the kitchen sink. Even the tidiest of kitchens can have problems with stinky sinks. Most of the time, the reason for this pervasive odor is the food particles that cling to sink pipes and garbage disposals. Fortunately, there are several methods of attack to fight back the reek from your sink.

Try a Soap and Water Soak

Sometimes the kitchen sink’s stink begins above the drain. Food residue dried on to the sink basin’s base or sidewalls can result when dirty dishes have spent too much time in the sink. For a sink basin that is squeaky clean and free of smells, soak it by inserting a sink stopper in the drain, partially filling the basin, and adding a teaspoon of your favorite dish soap.

With a gloved hand, swirl the basin’s contents so that the soap dissolves in the water. Let this stand in the basin for at least ten minutes so that the mixture loosens any food residue. Then remove the stopper, turning on the garbage disposal if your sink is equipped with one, flushing loose debris away.

If a good soaking for the basin does not help, it is time to look deeper. Start simple by flushing the drain with boiling water. A thorough hot flush is sometimes all the sink requires. Bring a small pot of water to a boil, then carefully pour the contents down the kitchen sink’s drain.

This flushes out leftover food as well as any that has broken down into gunk coating the drain or pipes. More bacteria are knocked out depending on how hot the water is. Try this step weekly for preventative maintenance to avoid stinky sinks. Just use caution to avoid burns from either the water or the resulting steam.

When a sink still stinks, it is time to check for obstructions. A utensil or a hard scrap of food, such as a bone, may have fallen into the sink’s drain. When lodged there, in the drain or stuck between the garbage disposal’s blades, utensils are capable of trapping food particles, preventing them from passing through properly. When left to rot, trapped foods emit odors and remain stuck.

Prior to removing obstructions, unplug your sink’s garbage disposal where it is plugged into the wall outlet. If there is no outlet, go to the breaker box to cut the electricity to the garbage disposal’s circuit. This may seem a hassle, but it is far better than the risk of the disposal turning on at the worst moment. Then, using a flashlight’s beam to peer into the drain’s depths, seek obstructions in the drain or near the blades. Remove anything you spot with needle-nose pliers.

Fizz Out Particles with Vinegar and Baking Soda

Grease and grime can collect on the sink drain’s walls and stubbornly remain. While an average bristled brush cannot reach all the way down your sink’s drain, a dramatic combination of vinegar and baking soda can scrub this gunk away. Boil a kettle of water, setting it aside.

In the meantime, pour a single cup of baking soda into the kitchen sink drain, followed by a single cup of vinegar. Let this solution react for between five and ten minutes before slowly pouring the kettle’s hot water down the drain. Baking soda is abrasive, vinegar is astringent, and hot water is cleansing; all three work together, scouring the walls of the sink’s drain. Finally, run the cold water for about a minute to rinse out any remaining components.

Go Green with Your Citrus Rinds

Instead of tossing your citrus rinds out, reuse them while freshening your garbage disposal and sink. Citrus is well known for its ability to eliminate foul odors. First, toss peels of oranges, lemons, or limes down the drain, turning on the faucet. Next and finally, turn on the garbage disposal. You will be grinding your way to a sink that smells fresh.

The place where sink drains meet garbage disposals is a metal flange. This metal sink flange is a common place to find food debris, and the gunk here is not easy to rinse away. Scrubbing is required to properly cleanse it of odor-causing food particles. Begin again by cutting power to the garbage disposal, either by unplugging it or using the breaker box.

Then squeeze several dollops of your favorite liquid dish soap onto a dish wand’s scrub head, using tap water to lightly wet its bristles. Lower the wand until you can scrub the top of the flange. After scrubbing, run the cold water for half a minute so that any loose debris gets flushed away.

If these solutions do not rid your sink of bad odors, the problem may lie with sewer gas rather than food particles. This foul-smelling source can leak in through drain traps or plumbing vents. For this, or for other fixes when you do not want to take the DIY route, homeowners near Winston-Salem, NC can call us at Bodenheimer Plumbing Services.

Please note that we don’t monitor emails on nights and weekends. For Emergency Service, please call (336)-788-3966.

At Bodenheimer Plumbing Services, Inc., we offer the best in residential and commercial plumbing services with nearly 80 years of experience serving the Triad area. See our list service areas below.